SnoCountry SnoCast: March In Like a Lamb and a Lion 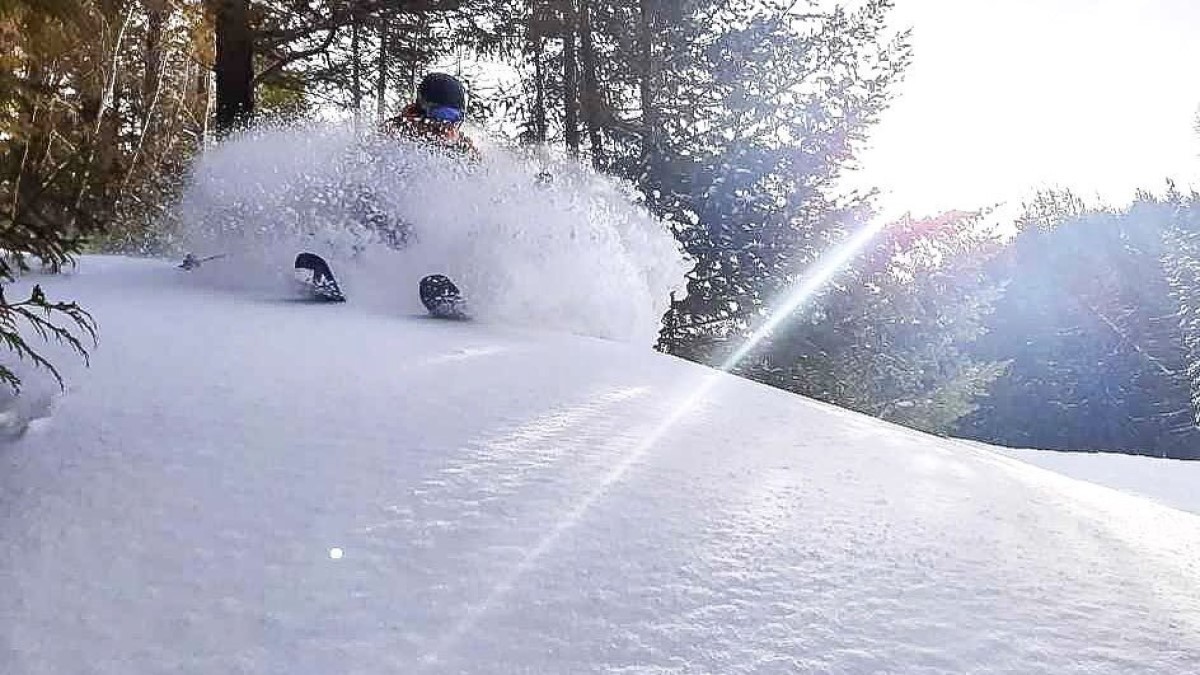 Western Canada will see new snow as a storm system leads into the first weekend of March. (SkiFernie/Twitter)

March is here and, for most, it will come “in like a lamb” with limited storm systems and generally pleasant, Spring-like conditions to hit the slopes. A few locations will see a “Lion-like” start to the month, with heavy, fresh snow in the forecast. Here are the details on the conditions ahead. 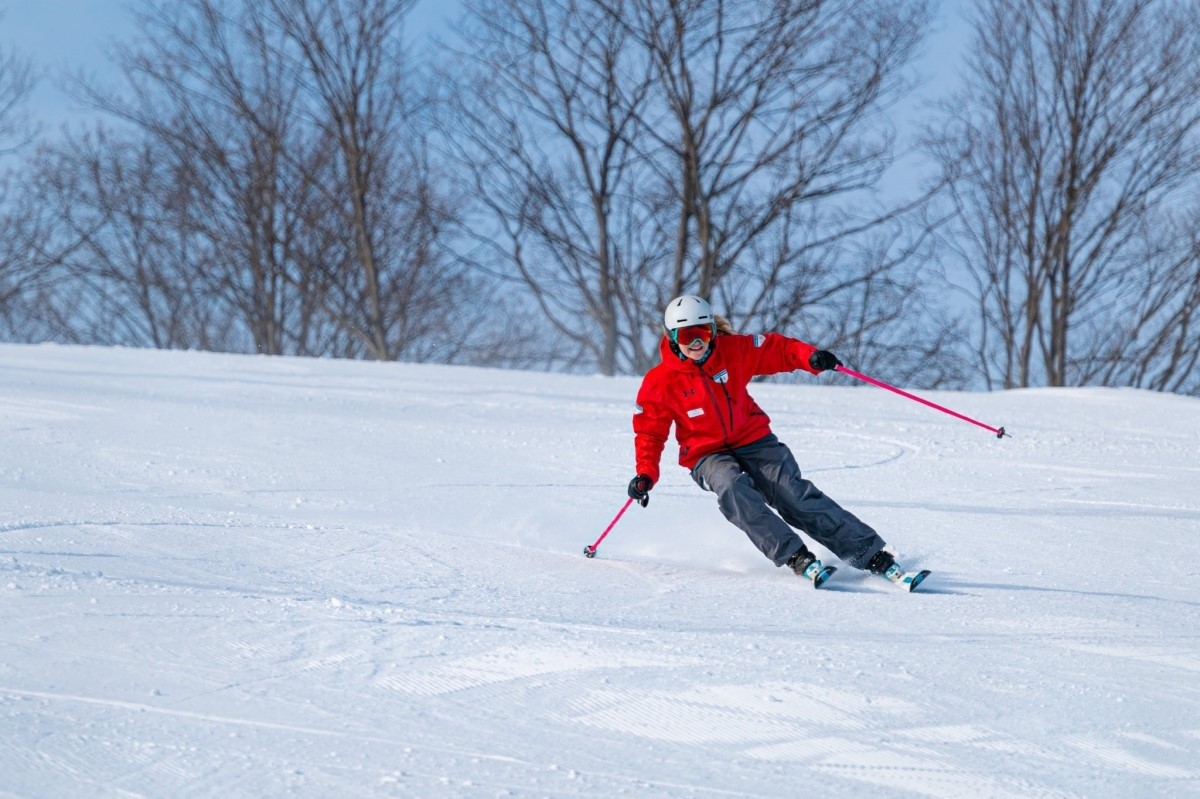 The East will see a combination of snowflakes and sunny days, and generally come “in like a lamb” for the first full weekend of March. Leading up to the weekend, a weak storm system will bring light and scattered snow from the Great Lakes to New York and northern New England. Many ski areas will see light snow amounts of 1-4”, with isolated spots upwards of 6” downwind (east-southeast of) the Great Lakes and in favorable up-sloping (west-northwest facing) mountain sides. Look to Mont Ripley, Boyne Mountain, and Kissing Bridge, along with Titus Mountain and Jay Peak Thursday to Friday as best bets. By the weekend, you can ditch a layer or two as rebounding temperatures build to as much as 5-15 degrees above average for most of the Great Lakes and Northeast. 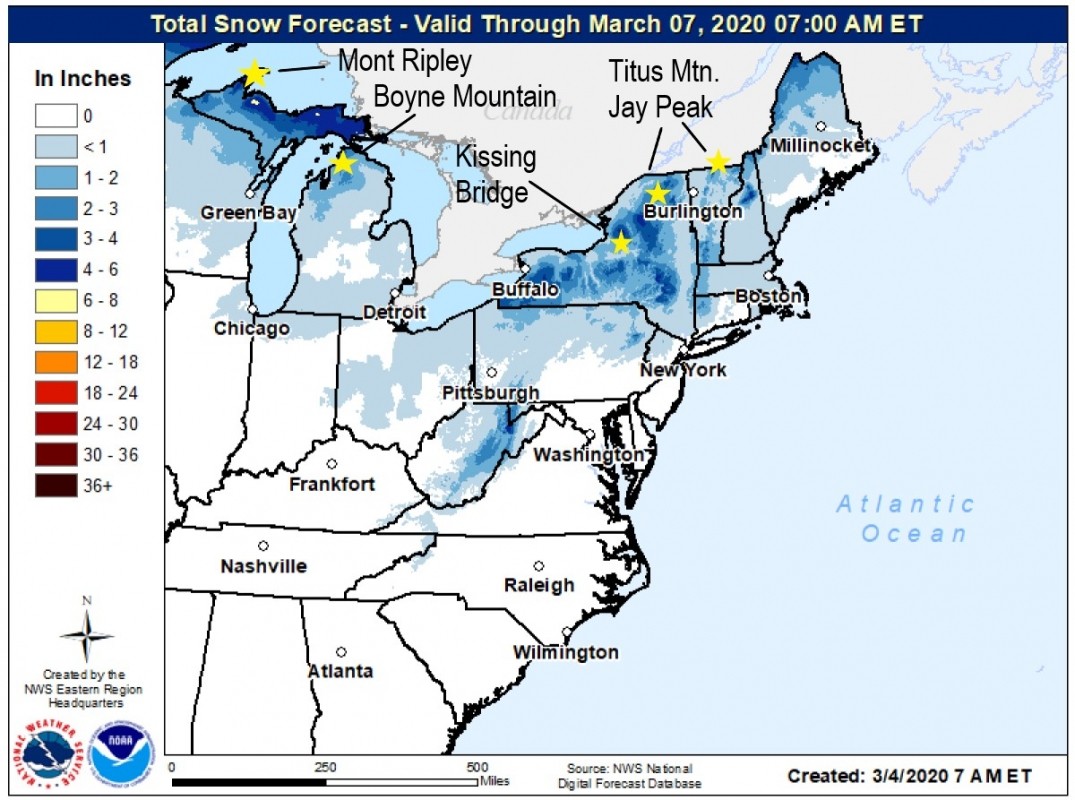 It’s all about location in the western U.S. in the days ahead. Some areas will feature mild, sunny, and spring-like ski days, while others see a continuation of wintry, snowy slopes. Head to the Pacific Northwest and British Columbia if you’re looking for March to come “in like a lion”. Fresh snow will fall Thursday through Friday as a storm plows in from the west. Look for a general 10-20”+ (25-50 cm) snow amount for the Coast Range and Rocky Mountains for British Columbia, and also the Cascades in Washington State. This same storm digs south and east by the weekend, with a broad 4-8 inches of snow expected from Oregon and northern California, to Idaho, western Montana, and northwest Wyoming peaks. Additional snow will fall into Monday for much of California’s Cascades to the interior West. Best bets include Whistler-Blackcomb, Fernie Alpine, Mount Seymour, and Mt. Baker before the weekend. Then, turn to Silver Mountain, Whitefish, Jackson Hole, and Grand Targhee Saturday through Sunday. 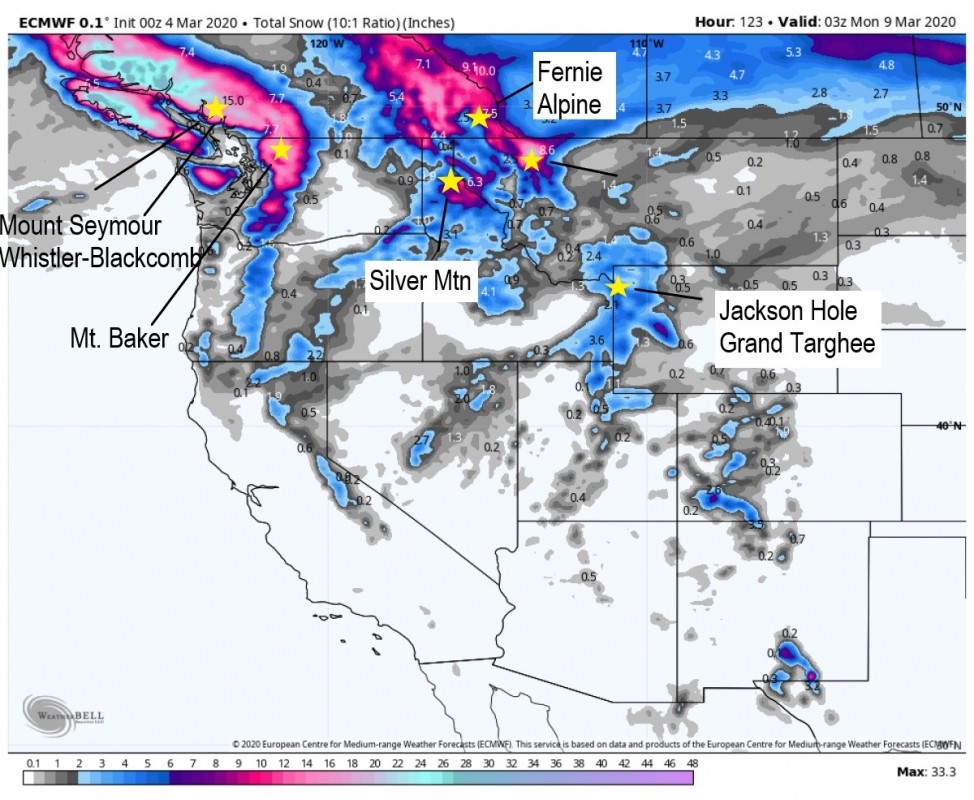