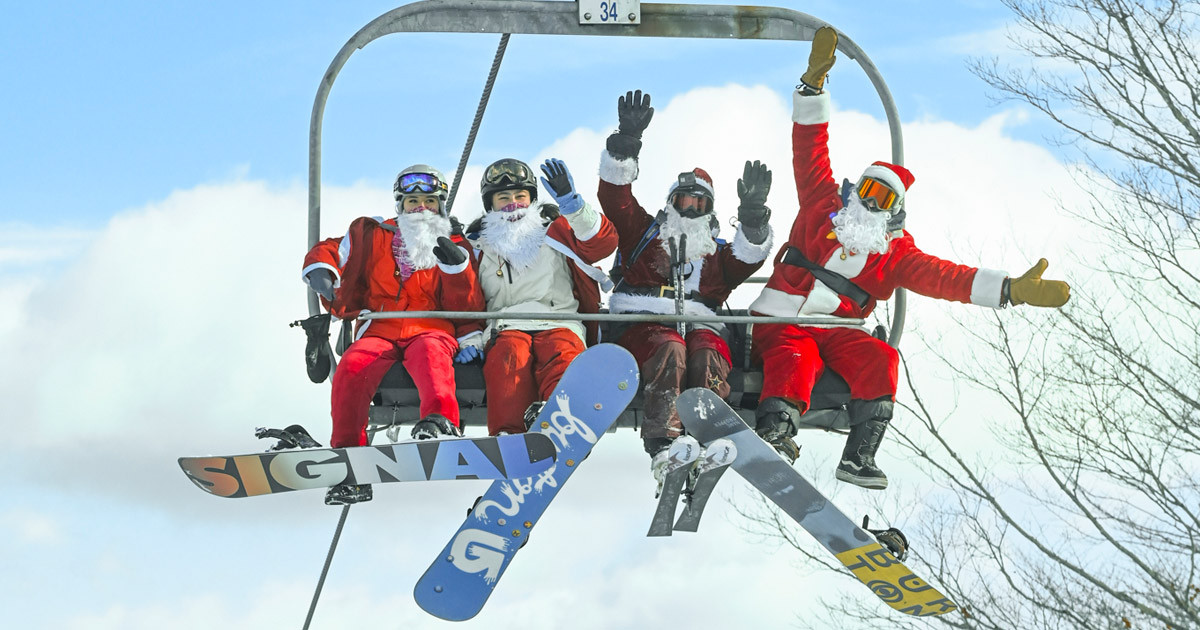 The weather never stops Santa, but Mother Nature might be on the naughty list this holiday with big changes from coast to coast. Image by Sunday River (Sunday River/Twitter)

The forecast is complicated. As frigid, Arctic air invades east of the Rockies, the West warms up with a series of storms. Ski conditions will vary greatly from coast to coast for the holiday weekend. Let's break it down in this week's SnoCast. 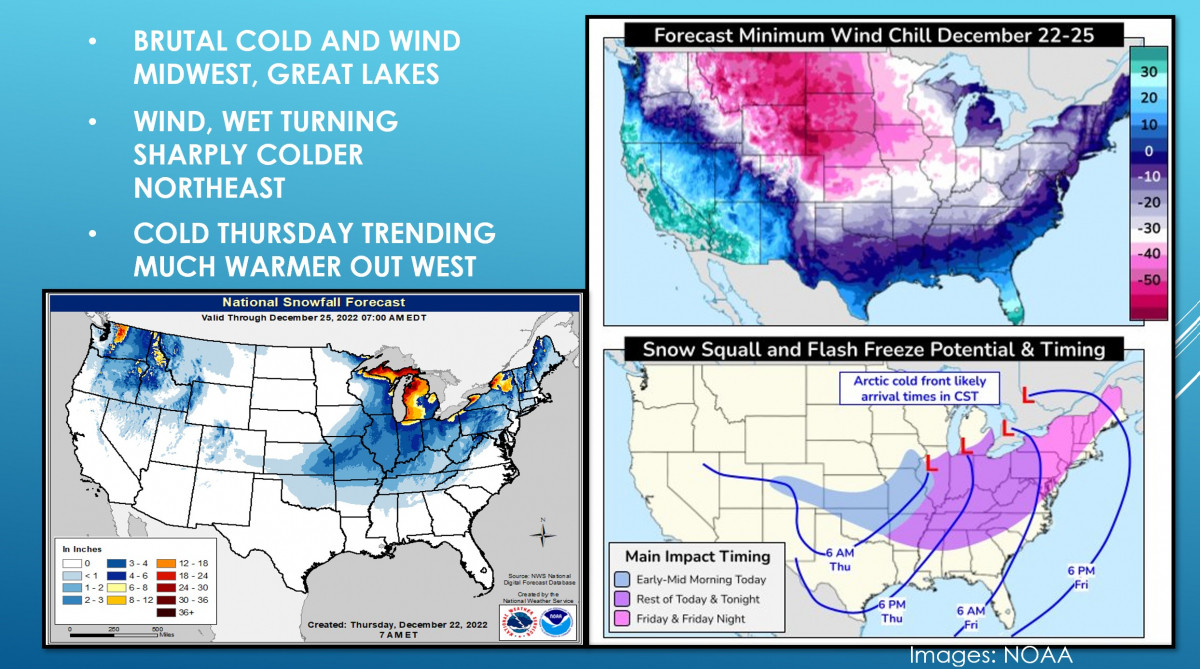 A powerful, likely historic winter storm is unfolding across the Midwest and Great Lakes Thursday with powerful winds, lake effect snow, and frigid temperatures expected through the Christmas holiday. With temperatures running 10-25 degrees below average, temperatures will struggle to get out of the single digits by day in the Midwest. Add strong winds over 40 mph across Minnesota, Wisconsin and Michigan, it's going to feel much colder, adding potential for frostbite and hypothermia in just minutes. If you plan to venture out this weekend, dress in warm, insulating layers, take frequent breaks inside, and check with your ski area, as the cold and wind may disrupt operations for safety concerns.

The good news? At least it comes with snow. Midwest ski areas will see several inches of new snow, with more than a foot of snow to the east and southeast of the Great Lakes. Wind and cold begins to relax after Monday onward, so conditions will improve for post-holiday skiing. 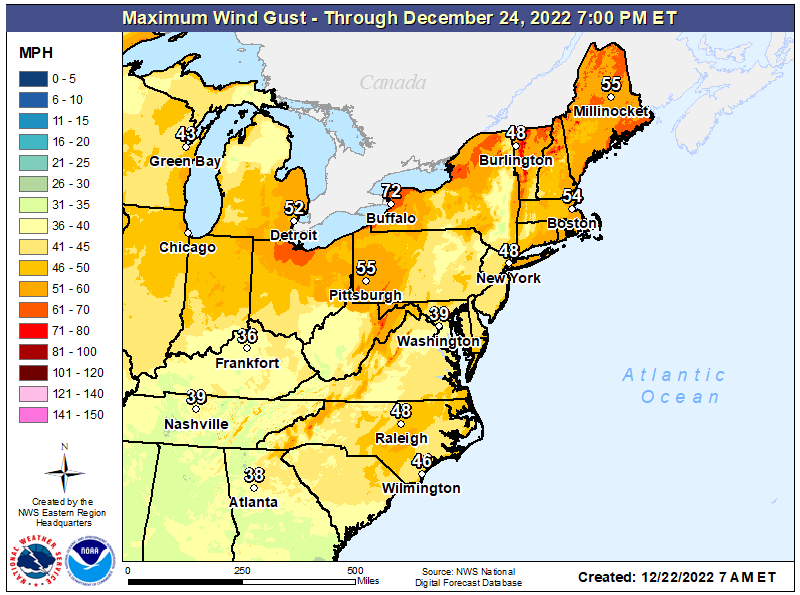 Before the chill reaches ski areas along the Appalachian chain, Thursday and (for some) Friday will be very warm, windy, and wet for most Eastern ski areas. Add in high winds with gusts as strong as 50-80 mph for some northeast summits, and disruptions to ski area operations leading up to the Christmas holiday. Double check conditions before heading to your favorite ski area.

Friday turns sharply colder as an arctic cold front sweeps through from West to East. Expect a rapid freeze of all standing water, bursts of snow, a wind shift from the west-northwest, and nearly 30 degree temperature drop from the previous day. Temps will hold mostly in the single digits wind gusty winds through Christmas. Dress appropriately with layers and make sure you take frequent breaks to stay warm.

Despite the ups and downs, there will be a quick burst of 1-4" of snow Friday night to Saturday in the Northeast and a lake effect band that will deliver potential locally heavy snow downwind of the Great Lakes, and potentially several inches for the ski areas  in northern New York's Adirondacks and the northern peaks in Vermont through Christmas (see snow map above). 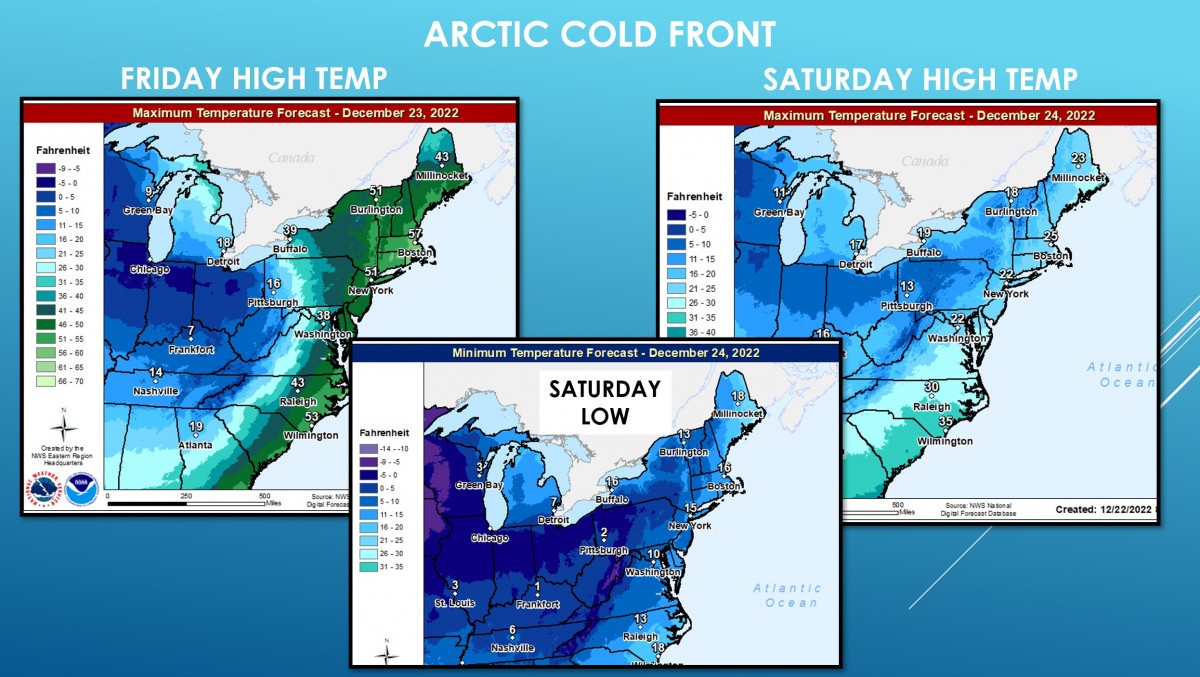 All the talk of major cold invading the U.S. this week may have Western skiers and riders scratching their heads. With the exception of Thursday in the Rockies, the West largely escapes the brutal cold blast with an opposite warming trend developing for most west of the Continental Divide through the holiday.

Thursday will feature very cold conditions for the Northern Rockies, with dangerously cold temperatures staying 20 to 30 below zero (yes, below zero!) through northern Colorado, Idaho, Montana and western Canada. Consider holding off on skiing Thursday in the northern Rockies since frostbite and hypothermia are very real risks.

By Friday and the Christmas holiday weekend, temperatures and snow levels will climb as the storm track shifts to the Pacific Northwest. At least three bouts of high-elevation snow and icy, wintry mix at mid and low elevations develop through the weekend. Conditions will be highly variable across the Northwest with the best chances for snow staying in the northern Cascades, BC's Coast Range, and the northern interior Rockies (Idaho, Montana).

The pattern stays active with multiple waves of high-elevation snow and lower elevation rain by early next week with snow becoming more likely to California's Sierras and the central Rockies (Utah, Colorado). The outlook through the end of 2022 features a wetter and warmer than normal pattern for the West, while the East also digs out of the chill. 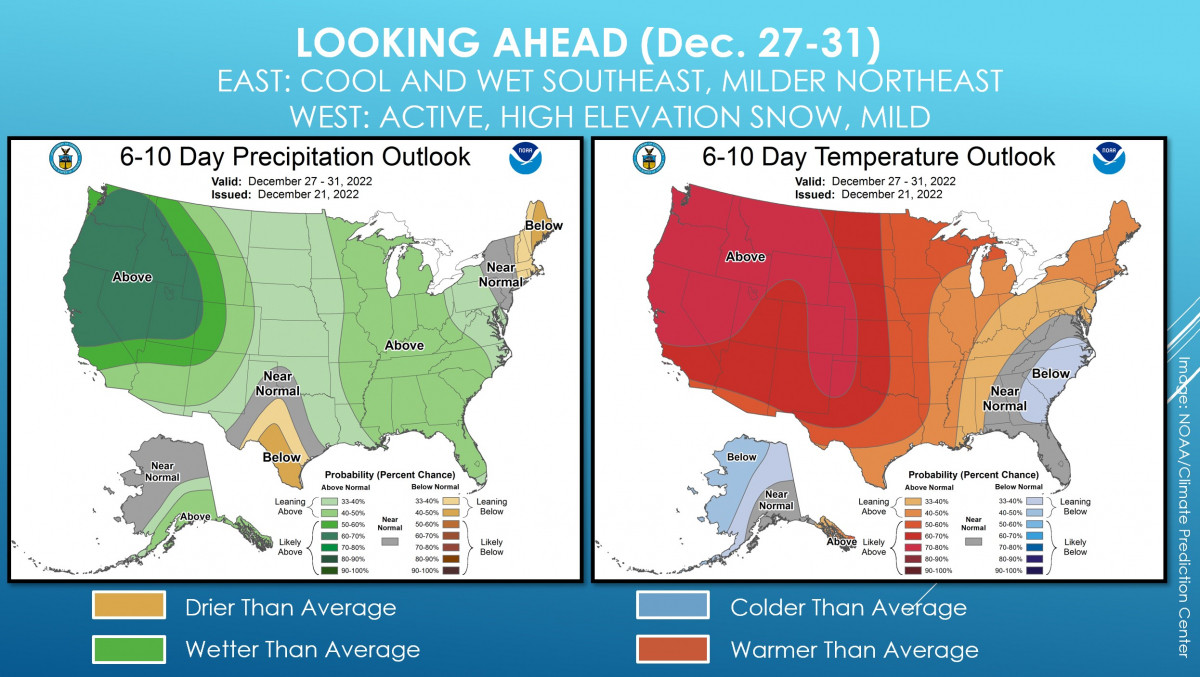