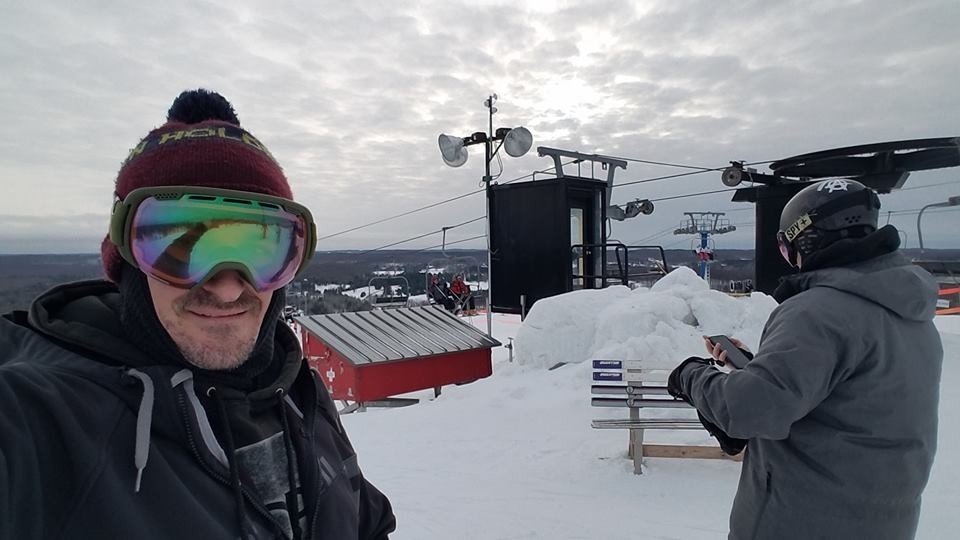 Michigan snowboarder David Zemens and friend Sabato Caputo have set a new North American record for snowboarding the most ski areas in a 24-hour period. They were able to hit 16 ski areas starting Friday evening, Jan. 11 in the northern half of the Lower Peninsula and ending Saturday evening on Jan. 12 near Detroit.

The old record was set in Vermont in 2013 by a crew from Snowboarder Magazine when they visited 12 ski areas in 24-hours. It was something Zemens, who hosts the popular snowboard website, agnarchy.com, had been thinking about ever since.

“I’ve been thinking about attempting something like that in my home state since reading that article in the magazine, over five years. This winter it finally came together with the help of Mickey McWilliams, executive director for Michigan Snowsports Industries Association (MSIA), who lined up all the ski areas so they would be expecting and ready for us,” Zemens told SnoCountry.com. “I thought maybe it would become an ordeal along the way, but it was fun and we never got tired. The ski areas were great, and we had people at many of the areas cheering us on.

“We are already thinking about ways and routes that we might be able to break the world record, which was 17 ski areas in Japan over 24-hours, according to Guinness,” Zemens laughed. “I think for the rest of this winter I’m going to enjoy visiting local ski areas near my home in Rockford.”

They started their record breaking trip by visiting Boyne Highlands, Nubs Nob and Boyne Mountain in the northwestern corner of The Mitten on Friday night. On Saturday morning they started at Treetops and Otsego Club in Gaylord, than on to Shanty Creek where they rode both Summit Mountain and Schuss Mountain slopes. Next was Mt. Holiday and Hickory Hills in Traverse City. That was followed by Crystal Mountain, Caberfae Peaks and Snow Snake in the central part of Lower Michigan. Heading on to the southeast corner of the Wolverine State they stopped at Mt. Holly, Alpine Valley, Pine Knob and finished at Mt. Brighton with an hour to spare on the record run.

They had a friend drive them on the demanding trip so they were able to stay dressed for boarding and ready to go as soon as they arrived, which helped immensely with time.

“Michigan has a lot of neat ski areas, and it was great just seeing all the people using the snowboard parks. Young and old they were having a great time,” said Caputo.

Michigan has the second most ski areas in the United States, only behind New York. It has 49 ski areas, 269 lifts, 50 terrain parks, nearly 1,000 runs and the only ski flying hill in the country. It is snow country.