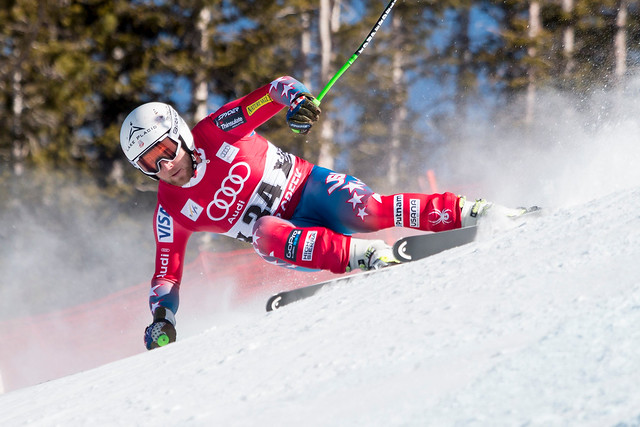 Light snow fell on the Beaver Creek Birds of Prey course for the Audi FIS World Cup super G and that was just fine for Austrian Marcel Hirscher and a whole bunch of Americans. Way north at Lake Louise, what else is new? Lindsey Vonn on her 17th World Cup with her second straight downhill blast at the Alberta resort.

Starting at Beaver Creek: Hirscher tackled and thanks to his strong 1:06:90 run, he managed to stay in the leader’s position until the last racer crossed the finish line. This is when Hirscher could finally celebrate his first world cup super-g win ever.

Second place went to the USA’s Ted Ligety, 2013 super-G World Champion 2013. The giant slalom specialist and multiple globe winner recognized that the conditions were tough today and is happy he could ski a podium in his home country. Ligety’s time was 1:07.23.

“When I got bib 29, I wasn't all that psyched on that. In super-G it's definitely nice to run early, but with the snowstorm today, it was really tough for those guys running 15 to 22, the snowstorm was really hard then. When I went it started to clear up a little bit so I was able to ski well and capitalize on that little break in the weather”, said Ligety.

Lake Placid’s Andrew Weibrecht’s attack from the back equaled his best world cup performance ever, Weibrecht was third in 1:07.28.

“Everything was running great today. Obviously there's some new snow so things are a little bit slower than you would expect from what we had yesterday, but it's a super smooth course and I think you just have to kind of charge it and have a little bit of fun with it today because it's going to feel good to you have to go hard. I'm happy with the way I skied and happy with the way I skied yesterday and just kind of rolled that into today and it's all good,” Weibrecht said. American Travis Ganong was sixth.

The last race on the Audi Birds of will be tomorrow’s giant slalom. All eyes will be on Ligety.

Lindsey Vonn completed a World Cup downhill sweep Saturday for her 17th victory at Lake Louise, or as it has come to be known, "Lake Lindsey."

The women finish with a Super G Sunday where Vonn will try for another weekend sweep. An intriguing scene will be USA technical star Mikaela Shiffrin trying to expand her World Cup points in her first speed race on the circu