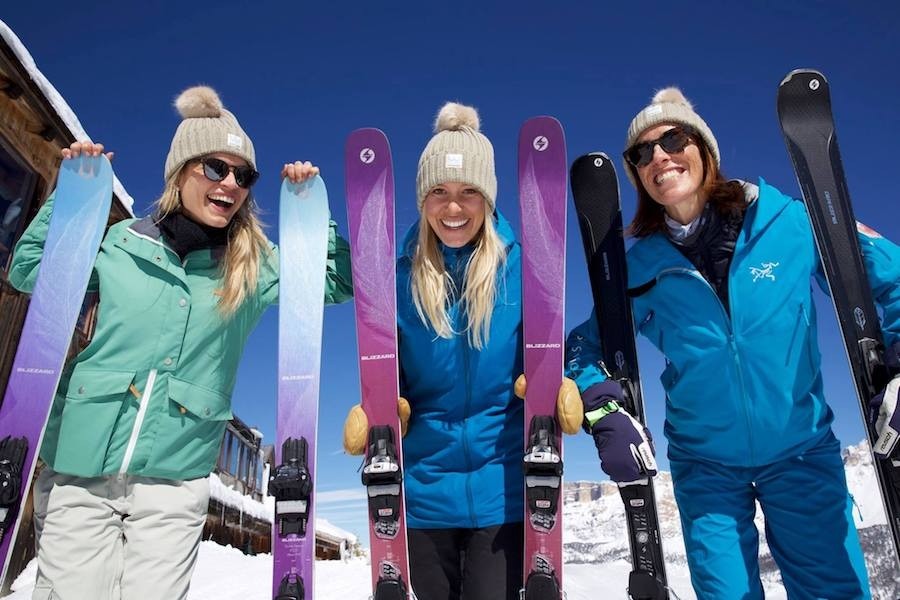 Women to Women looks to take all women skiers to new levels of confidence, excitement and freedom. (Blizzard Ski/Facebook)

Leslie Baker-Brown, Blizzard Tecnica Marketing Manager, was on an athlete summit in Portillo, Chile, a few years ago when one of the pro skiers she was with made a comment that stopped her in her tracks: she gets intimidated when walking into a ski shop.

“I thought, if you get intimidated walking into a ski shop, imagine what the rest of us feel like!” Baker-Brown told SnoCountry.com at a recent Ladies Day event at Mount Sunapee. 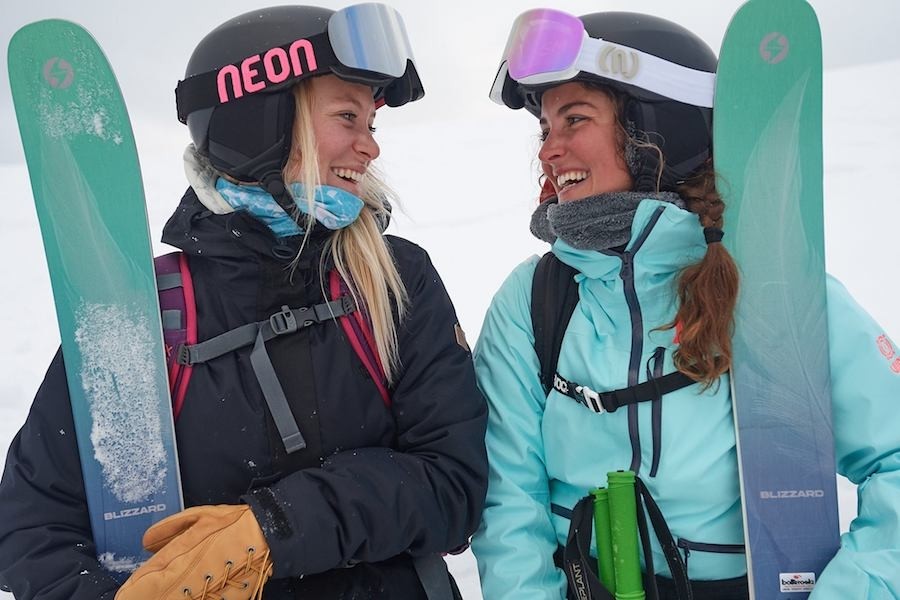 Blizzard Tecnica has been asking how they can empower, engage, and inspire women through their Women to Women Project (W2W). “How can we get more women to really embrace and share these great experiences?” Baker-Brown asked.

Baker-Brown said they realize many women have questions about ski and boot buying. “What is the last of a ski boot? How should a ski boot fit? What should it feel like when you go into the store? What does rocker profile mean? What is a sidecut and radius and what are all these dimensions? One of our goals is to really educate women so then you take control of your purchasing experience.”

W2W now provides a plethora of useful information, including fitness and health advice, ski tips and inspirational stories. At the Mount Sunapee Ladies Day, she discussed some of the terminology that’s useful to be familiar with so you don’t have to rely on your boyfriend or dad to do all the talking at the ski shop:

BASE The bottom surface of the ski that makes contact with the snow is referred to as the base. Most base materials are composed of graphite, polyethylene or an extruded composite. The bases need care and feeding and could use a trip or two each season under the waxing machine. (Your local retailer can provide a tuning service or you can learn how to do it yourself.)

TOP SHEET The top sheet of the ski is the upper most layer of the ski. While its surface serves as the decorative component of the ski it plays an important role in the integrity of the ski as well. It is the final bonding for all the components of the ski and provides protection and durability.

CORE The core of the ski refers to the internal materials of the ski. These vary depending on the construction of the ski and may include wood, foam, metal or fiberglass. The core affects the skis weight, flex, stability and performance.

EDGES The sharp metal pieces along the outside edges of the base of the ski are simply called the edges. The edges help to keep the ski in control on the slopes by allowing the skier to grip the snow (or ice) through a turn. It’s important to keep these edges tuned for optimal performance. They can become “dull” with use, especially when skiing on icy slopes. Hitting objects such as rocks or pebbles can damage the edges and impair the performance. Ski shops offer tuning or you can get yourself your own set-up and easily keep your skis in the best shape for optimum performance.

SIDEWALL The sidewall of the ski is the area and material along the lateral edge of the ski, below the top sheet and above the metal edge. There are generally two types – Full Sidewall where this sidewall runs the full length of the ski and aids in the skis stability, durability and performance. The type of material (ABS or Phenol) used in the sidewall will effect the skis overall performance. Partial Sidewalls generally run under the foot area but do not extend fully to the tip and tail resulting in a softer and easier skiing experience. Full Sidewalls are generally found on the top performance levels of skis and Partial Sidewalls are found on the lower performance levels of skis.

OVERALL LENGTH The total length of the ski is measured in centimeters (cm) from the tip to the tail.

DIMENSIONS A ski's dimensions are determined by measuring (in millimeters) its width in three places: at its two widest points, the tip and tail, and at its narrowest, the waist. Tip/waist/tail measurements are usually separated by slashes or dashes and displayed as, for example, 131/98/119 mm or 131-98-119 mm.

TIP / SHOVEL The shovel is the front of the ski where it begins to turn up to the tip. It is the widest part of the ski, and is where the turn is initiated. A wide tip floats more easily on soft snow. On hard snow, wider tips matched with narrower waists create a ski best suited for short-radius carved turns.

WAIST The waist of the ski is the narrowest point when it is measured edge to edge. Typically this is near the center of the ski. Of the three dimensions (Tip – Waist – Tail), the waist width is the most critical and most widely used term. Narrow waists allow you to establish an edge sooner, resulting in speedy, usually nimble skis that are ideal for groomed runs. They can also shift from edge to edge more quickly. Wide waists deliver more surface area (more area to make contact with snow), which makes them preferable in soft snow and powder.

CAMBER PROFILE The camber profile is the shape of the ski from the horizontal view. It is the side profile. The camber profile of a ski can come in many different shapes (traditional camber, rocker, early rise etc.). The shape of the camber profile will help to determine many of the performance and usage characteristics of the ski. Traditional camber skis are used for racing and high performance front-side skiing where as highly rockered skis are used for powder and softer snow skiing. As a general principal, a ski with more rocker is designed to be used in softer snow.

TRADITIONAL CAMBER Traditional camber is generally found in traditional front-side skis. When you hold two skis base-to-base, the skis touch at the widest point of the tip and the tail, and there is a gap underfoot. The camber of the ski creates this gap. When a skier stands on a ski, it flattens due to the skier’s weight. At that point the entire length of the base can provide stability and the ski’s metal edge can initiate turns. Camber provides the energy for a ski to snap back from turns, creating a sensation of “liveliness.” In short, Camber puts springiness and pop into a ski. It permits easy handling, responsive turning, powerful carving, stability and, due to ample edge contact with the snow, good grip on icy slopes. It remains a popular choice when skiing groomed slopes or on hard-pack snow.

ROCKER Rocker is essentially the opposite of traditional camber, and is sometimes known as reverse camber or negative camber. The side profile of a rockered ski resembles the upturned rails of an old-school rocking chair. Rocker can be located many places - it can be in the tip alone, in both the tip and the tail, or in the full length of the ski. Rocker influences the ease and control of the ski. More rocker promotes easier entry and exit of the turn making the skis easier to use and easier to control. Less rocker increases the precision and power.

FULL ROCKER (no camber) A concave, underfoot arch means that a ski with full rocker or reverse camber will contact the snow directly under the bindings while the tip and tail curve up from the center like a smile. Combined with a wide waist, rocker improves float in deep snow but can be squirrely and tough to control on anything else.

TIP ROCKER (or Front Rocker) Skis can have rockered tips that transition to a more traditional camber underfoot. Skis like this handle crud and other bumpy features well and are as a rule less technically demanding than skis with traditional camber, especially on hard snow. This is by far the most common configuration, although the amount of rise, or tip rocker can vary considerably and will affect the ease of turn initiation.

TIP & TAIL ROCKER (Camber underfoot) Skis with rocker in both the tip and tail but traditional camber underfoot. Varying degrees of this profile are found in the majority of All-Mountain and Freeride skis.

SKI / BINDING SETUP OPTIONS SYSTEM SKIS (or Integrated bindings) The skis are designed with an integrated binding system. The only binding that works with these skis is the binding that is sold with it. The ski and binding come together as a package. They cannot be used separately. Blizzard offers the IQ System where the binding is fully integrated into the body of the ski. This allows the ski to flex more naturally and offers great edge hold and easy turning.

FLAT SKIS The ski does not come with a binding. Any binding can be used and is sold separately. This gives the buyer more options in choosing a binding.