Paintball Biathlon Is A Big Hit At Mountain Top Inn

Competitors of every age skied at the Mountain Top Paintball Biathlon. (Roger Lohr)

The paintball biathlon event is patterned after the Olympic sport and the Mountain Top competition was conducted in a festival-like atmosphere, whereby cross country skiing is combined with shooting paintballs at vinyl targets. The biathlon featured several races throughout the day based on age group and 244 skiers participated shooting more than 15,000 paintballs at targets hanging on what appeared to be the side of a barn. There were five races for ages Pre-K through eighth grade, one race for high school aged participants, and one race for adults. Course distances ranged from .3 km to 4.5 km loops. 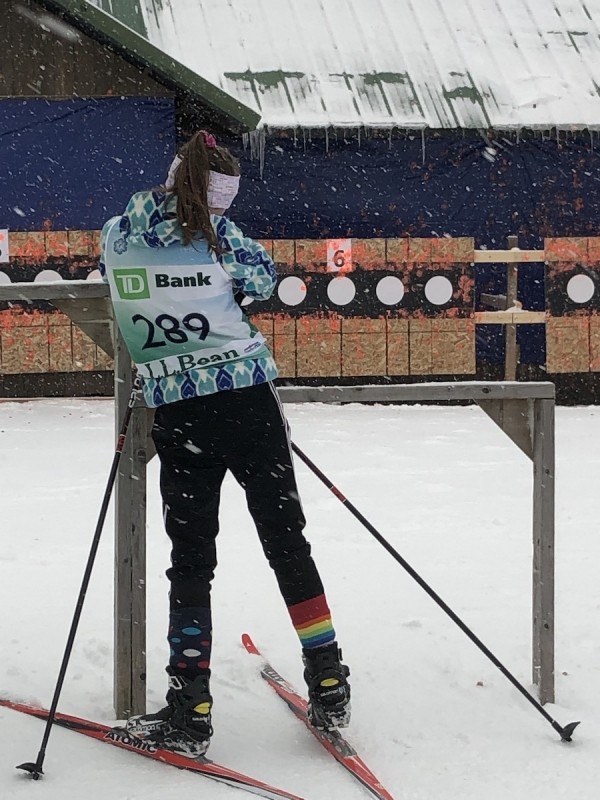 The race day involved the participation of 40 volunteers in addition to Mountain Top Inn & Resort staff, as well as use of Mountain Top Inn & Resort facilities and grooming resources to execute. Racers from all over New England plus New York and New Jersey traveled to Chittenden, Vermont to compete. It was also reported that a wedding group went out and did a mini biathlon on the day before the race, which was incorporated into their pre-wedding festivities.

The biathletes (male or female) are judged based on their speed through the course; however, they must stop and calm their breathing enough to aim and hit targets along the way. In the Olympics at four different stages in the race, skiers will either shoot from a standing position (at targets that are 4.5 inches wide) or from the prone position on their belly (at targets that are 1.8 inches wide). If they are not able to calm their breathing enough, they will miss their targets. Each time they do miss a target they are given either an additional time or they must ski a distance penalty, which can quickly add up. So, the skier must go fast enough to stay competitive, but slow enough to maintain control.

While biathlon is the only Olympic winter sport where the U.S. Ski & Snowboard team has never won an Olympic medal, Lowell Bailey became the first American in history to win a biathlon world championship at the 2017 IBU World Championships in Hochfilzen, Austria, taking the gold medal in the men's 20-kilometer individual. With events like the Paintball Biathlon at Mountain Top as an introduction, perhaps an American will soon stand atop the podium for biathlon at the Olympics.

Roger Lohr, the SnoCountry.com Cross Country Ski Writer is the founder and editor of XCSkiResorts.com. He is a writer and marketer who lives in Lebanon, NH. He’s had Nordic skiing and snowshoeing content posted on MSNBC.com, SnowshoeMag.com, WhitebookSki.com, NSAA Journal, CCSAA Nordic Network, Cross Country Skier, SkiTrax, Ski Area Management, NASJA, Green Energy Times, and others. Lohr also wrote the Board Report snowboard column in SnowEast Magazine. He conducted the CCSAA Skier Visit Study and created the Best XC Ski Area Poll and worked for the industry trade organization SIA. He loves skiing on xc ski trails, telemarking in the backcountry, and snowboarding in powder. On Twitter @XCSkiTravel